In this 8th episode of my #Perfect10 webcast I look at why understanding priorities and dependencies are an important part of planning an upgrade.

Next Up: Estimating Work Effort & Downtime

I’ve always struggled with tracking time.  It’s partly because of my work where I’ll often leap between three or four things at once “oh compact is running, whilst that continues I’ll just do this..” and partly because I disappear down a rabbit hole and forget to “stop” whatever timer I start.  I  have had various time tracking tools integrated to my Mac where a key press starts a timer and another stops it.  It’s the stopping that’s the problem. Tim is much more diligent and carefully logs all his time in a tiny moleskine (analog ftw!) and our friend Mark Myers has long advocated for the pomodoro method where time is broken out into 25 minute chunks.  In fact Mark’s approach to work most closely aligns to mine in that he is often juggling multiple phone calls and pieces of development at the same time and so when he showed me his new Zei tool from Timeular I was convinced enough that we bought one for Tim.  Within a week of him getting it I decided to get one for myself.

Long story short.. it’s the first time tracking tool that I find easy to use and fits into how I work.  The Zei is actually an octohedran (or a D8 for those of you that way inclined) that fits nicely into your hand, you simply label each side,  tell the app what each side is labelled for and then turn that side “face up” when you start work on that project.  The bluetooth connection to my Mac or phone detects when I turn another side face up and stops the timer on the previous project, starting it on the new one.  There are apps for just about every platform and the reporting is really nice.  The cost is 49 Euro and then 9 Euro a month for unimited projects but we both spent 99 Euro as a one off cost that limits you to 8 projects on the device which suits us fine.  You can (and we do) erase and rewrite the sides of the device regularly (well every few weeks) as work changes.

You can see on my timeular below that I’m currently writing a blog – the terrible scrawl is mine and I have erased / written over badly a few times.  I have left one side entirely blank so if I’m doing “nothing” such as shopping for books online I just turn that face up and I’m not logging time.  You can add more activities in the actual app but I like having the 7 most important ones to track.  When you turn a side face up the app detects that and stops the previous timer, startimg a new one for the new face up side but if you turn it again in less than a minute it doesn’t log anything at all.  The battery on the Zei is meant to last 10,000 hours

This a sample report from the app on my phone showing activities logged.  I’ve obviously  badly replaced the actual ones with sample ones so I can share it here.  You can see how well it tracks even small amounts of time.  If I’m answering emails I wouldn’t usually start a timer but I can easily turn the timeular face up and it will log all the small increments of time that usually disappear.  For my own reference even on fixed price projects I find it incredibly useful. 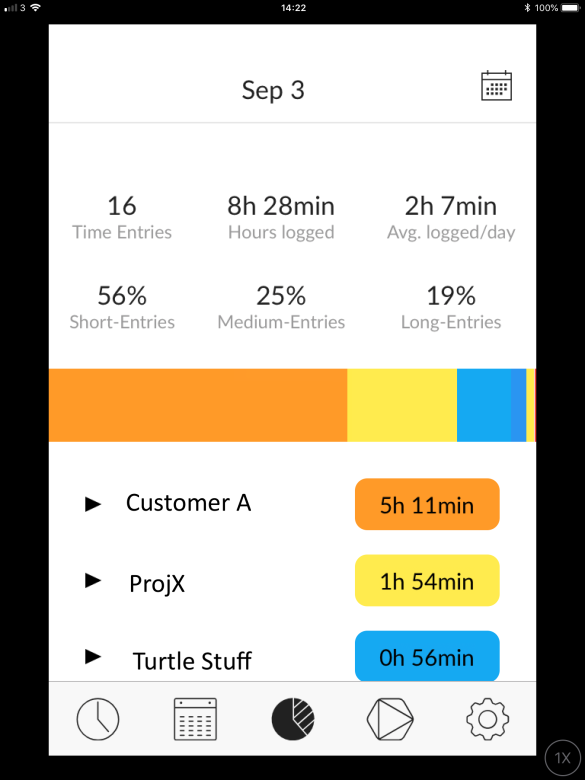 As an additional bonus I know Mark has spoken to them several times about features he’d like and they are very keen to work with customers. So..

from a small company that cares about their solution

at a good price point

I can’t say better than that http://timeular.com