I have been working on a PMR for Connections 5 trying to configure SPNEGO , foolishly as it turns out using the IBM Connections 5 Knowledge Center.  I have just finished a 3hr screenshare with WebSphere security support who started the call asking why on earth I was configuring it the way I was.  When I showed them the documentation on the Knowledge Center for configuring SPNEGO I was asked “why are the Connections team saying to do that, that will never work”. Imagine my joy having spent nearly 2 days working on it before opening a PMR. 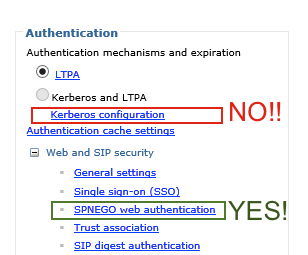 Finally they also disagree on requiring the connectionsAdmin account to be the one that is used to start Windows services which may be a bad use of wording on this document here (See item 6).   They have advised that as far as SPNEGO is concerned any AD account would do.